I am happy to announce the first public release of Wirbelsturm, a Vagrant and Puppet based tool to perform 1-click local and remote deployments, with a focus on big data related infrastructure. Wirbelsturm’s goal is to make tasks such as “I want to deploy a multi-node Storm cluster” simple, easy, and fun. In this post I will introduce you to Wirbelsturm, talk a bit about its history, and show you how to launch a multi-node Storm (or Kafka or …) cluster faster than you can brew an espresso.

Update May 27, 2014: If you want to build real-time data processing pipelines based on Kafka and Storm, you may be interested in kafka-storm-starter. It contains code examples that show to integrate Apache Kafka 0.8+ with Apache Storm 0.9+, while using Apache Avro as the data serialization format.

This section is an appetizer of what you can do with Wirbelsturm. Do not worry if something is not immediately obvious to you – the Wirbelsturm documentation describes everything in full detail.

Assuming you are using a reasonably powerful computer and have already installed Vagrant (1.4.x – 1.5.x is not supported yet) and VirtualBox you can launch a multi-node Apache Storm cluster on your local machine with the following commands.

Done – you now have a fully functioning Storm cluster up and running on your computer! The deployment should have taken you significantly less time and effort than going through long blog posts or working through the official documentation. On top of that, you can now re-deploy your setup everywhere and every time you need it, thanks to automation.

Note: Running a small, local Storm cluster is just the default example. You can do much more with Wirbelsturm than this.

Let’s take a look at which virtual machines back this cluster behind the scenes:

Storm also ships with a web UI that shows you the cluster’s state, e.g. how many nodes it has, whether any processing jobs (topologies) are being executed, etc. Wait 20-30 seconds after the deployment is done and then open the Storm UI at http://localhost:28080/. 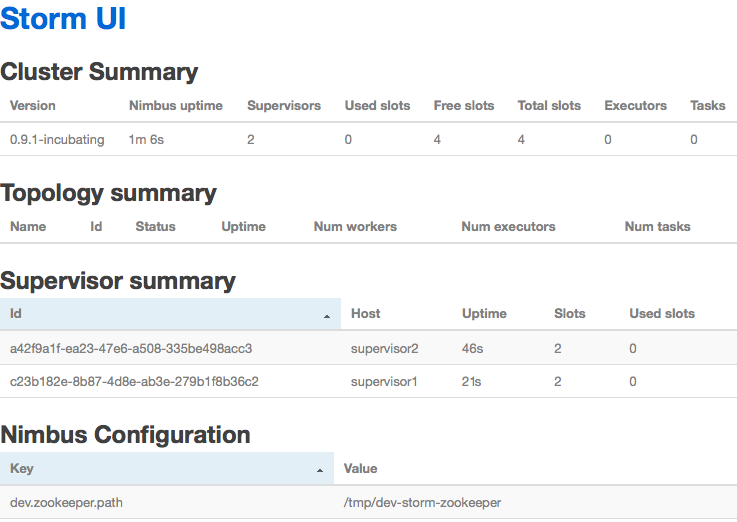 Figure 1: The default example of Wirbelsturm deploys a multi-node Storm cluster. In this screenshot of the Storm UI you can see the two slave nodes -- named supervisor1 and supervisor2 -- running Storm's Supervisor daemons. The third machine acts as the Storm master node and runs the Nimbus daemon and this Storm UI. The fourth machine runs ZooKeeper.

What’s more, Wirbelsturm also allows you to use Ansible to interact with the deployed machines via its ansible wrapper script:

Want to run more Storm slaves? As long as your computer has enough horsepower you only need to change a single number in wirbelsturm.yaml:

Then run vagrant up again and shortly after supervisor3 and supervisor4 will be up and running.

Want to run an Apache Kafka broker? Just uncomment the kafka_broker section in your wirbelsturm.yaml that it looks similar to the following example snippet (only remove the leading # characters, do not remove any whitespace):

Then run vagrant up kafka1. Now you have Kafka running alongside Storm.

Once you have finished playing around, you can stop all the machines in the cluster again by executing vagrant destroy.

Let me use an analogy to explain the motivation to build Wirbelsturm. While I assume every last one of us wants to work somehow like this… 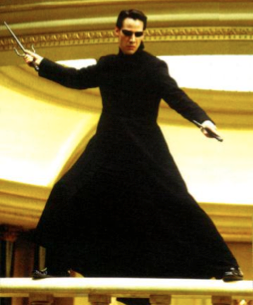 …most of our actual time is rather spent on doing something like that: 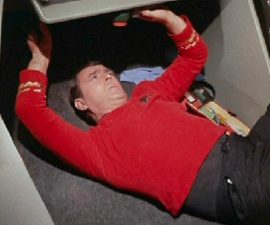 Without any automated deployment tools the task of setting up cluster environments with (say) Storm or Kafka is simply a very time-consuming, complicated, and – let’s face it – mind-numbingly boring experience. So the motivation for Wirbelsturm was really simple: first, minimize frustration, and second, help others.

While these were the primary reasons there were also secondary aspects: Wirbelsturm should integrate nicely with existing deployment infrastructures and the associated skills of Operations teams – that’s why it is so heavily based on Puppet, though e.g. Chef and Ansible would have been good candidates, too. Also, it should allow you to perform local deployments (say, your dev laptop) as well as remote deployments (larger-scale environments, production, etc.) – that’s why Vagrant was added to the picture. You should also be able to easily transition from a Wirbelsturm/Vagrant backed setup to a “real” production setup without having to re-architect your deployment, switch tools, etc.

As such Wirbelsturm is one of the tools that help to make the process of going from “Hey, I have this cool idea” to “It’s live in production!” as simple, easy, and fun as possible. A developer should be free to completely screw up “his” test environment; two developers in the same team should always have the same copy of an environment; the integration environment of that team should look and feel the same way, too; and for sure that should apply to the production environment as well.

I think at this point the motivation should be pretty clear, and in the section Is Wirbelsturm for me? I list further examples on what you can do with Wirbelsturm.

Here are some ideas for what you can do with Wirbelsturm:

Actually I will not talk a whole lot about Wirbelsturm itself in this blog post anymore. If I managed to spark your interest feel free to head over to the Wirbelsturm project page and start reading – and fooling around – there. There is also a list of supported Puppet modules in case you’re wondering what kind of software you can deploy with Wirbelsturm (summary: you can use any Puppet module with Wirbelsturm, but some are easier to use than others).

Instead I want to spend a few minutes in the next sections talking about what tasks and problems had to be solved to put Wirbelsturm together, and also share some lessons learned along the way.

The long road of getting there

What needed to be done to create the first version of Wirbelsturm? Here’s a non-comprehensive list, I hope my memory serves me well.

Lessons learned: mistakes made along the way

Of course there were more mistakes, but the ones above were the most noteworthy ones. :-)

I am really happy that Wirbelsturm is finally available as free and open source software. Hopefully it will help you to quickly get up and running with technologies such as Graphite, Kafka, Storm, Redis, and ZooKeeper. Enjoy!

Update May 27, 2014: If you want to build real-time data processing pipelines based on Kafka and Storm, you may be interested in kafka-storm-starter. It contains code examples that show to integrate Apache Kafka 0.8+ with Apache Storm 0.9+, while using Apache Avro as the data serialization format.

The following projects are similar to Wirbelsturm:

Commercial Hadoop vendors have also begun to integrate Storm into their product offerings:

Another way of deploying Storm is via platforms such as Hadoop YARN and Apache Meos:

Lastly, there are also a few open source Puppet modules for Hadoop, Kafka, Storm, ZooKeeper & Co. I don’t want to give an comprehensive overview of these modules in this post, but you can head over to places such as PuppetForge and GitHub and take a look yourself. Feel free to drop those modules into Wirbelsturm and give them a go!