In the past few days I have been test-driving Twitter’s Storm project, which is a distributed real-time data processing platform. One of my findings so far has been that the quality of Storm’s documentation and example code is pretty good – it is very easy to get up and running with Storm. Big props to the Storm developers! At the same time, I found the sections on how a Storm topology runs in a cluster not perfectly clear, and learned that the recent releases of Storm changed some of its behavior in a way that is not yet fully reflected in the Storm wiki and in the API docs.

In this article I want to share my own understanding of the parallelism of a Storm topology after reading the documentation and writing some first prototype code. More specifically, I describe the relationships of worker processes, executors (threads) and tasks, and how you can configure them according to your needs. This article is based on Storm release 0.8.1, the latest version as of October 2012.

Update 2012-11-05: This blog post has been merged into Storm's documentation.

For those readers unfamiliar with Storm here is a brief description taken from its homepage:

Storm is a free and open source distributed realtime computation system. Storm makes it easy to reliably process unbounded streams of data, doing for realtime processing what Hadoop did for batch processing. Storm is simple, can be used with any programming language, and is a lot of fun to use!

Storm has many use cases: realtime analytics, online machine learning, continuous computation, distributed RPC, ETL, and more. Storm is fast: a benchmark clocked it at over a million tuples processed per second per node. It is scalable, fault-tolerant, guarantees your data will be processed, and is easy to set up and operate.

What makes a running topology: worker processes, executors and tasks

Storm distinguishes between the following three main entities that are used to actually run a topology in a Storm cluster:

Here is a simple illustration of their relationships: 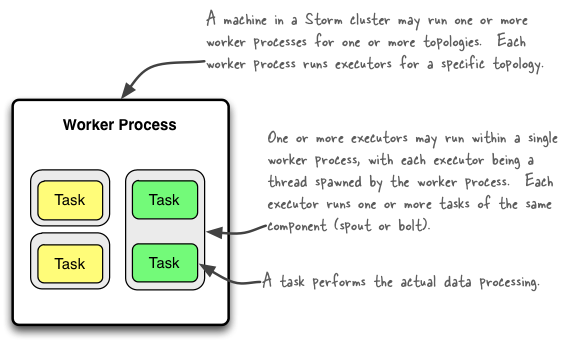 Figure 1: The relationships of worker processes, executors (threads) and tasks in Storm

A worker process executes a subset of a topology, and runs in its own JVM. A worker process belongs to a specific topology and may run one or more executors for one or more components (spouts or bolts) of this topology. A running topology consists of many such processes running on many machines within a Storm cluster.

An executor is a thread that is spawned by a worker process and runs within the worker’s JVM. An executor may run one or more tasks for the same component (spout or bolt). An executor always has one thread that it uses for all of its tasks, which means that tasks run serially on an executor.

A task performs the actual data processing and is run within its parent executor’s thread of execution. Each spout or bolt that you implement in your code executes as many tasks across the cluster. The number of tasks for a component is always the same throughout the lifetime of a topology, but the number of executors (threads) for a component can change over time. This means that the following condition holds true: #threads <= #tasks. By default, the number of tasks is set to be the same as the number of executors, i.e. Storm will run one task per thread (which is usually what you want anyways).

Also be aware that:

See Understanding the Internal Message Buffers of Storm for another view on the various threads that are running within the lifetime of a worker process and its associated executors and tasks.

Configuring the parallelism of a topology

Here is an example code snippet to show these settings in practice:

Example of a running topology

The following illustration shows how a simple topology would look like in operation. The topology consists of three components: one spout called BlueSpout and two bolts called GreenBolt and YellowBolt. The components are linked such that BlueSpout sends its output to GreenBolt, which in turns sends its own output to YellowBolt. 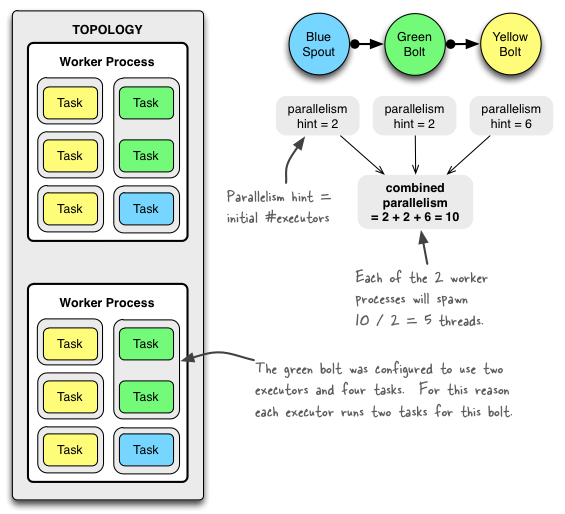 Figure 2: Example of a running topology

The GreenBolt was configured as per the code snippet above whereas BlueSpout and YellowBolt only set the parallelism hint (number of executors). Here is the relevant code:

And of course Storm comes with additional configuration settings to control the parallelism of a topology, including:

Update Oct 18: Nathan Marz informed me that TOPOLOGY_OPTIMIZE will be removed in a future release. I have therefore removed its entry from the configuration list above.

How to change the parallelism of a running topology

A nifty feature of Storm is that you can increase or decrease the number of worker processes and/or executors without being required to restart the cluster or the topology. The act of doing so is called rebalancing.

You have two options to rebalance a topology:

Here is an example of using the CLI tool:

References for this article

To compile this article (and to write my related test code) I used information primarily from the following sources:

My personal impression is that Storm is a very promising tool. On the one hand I like its clean and elegant design, and on the other hand I loved to find out that a young open source tool can still have an excellent documentation. In this article I tried to summarize my own understanding of the parallelism of topologies, which may or may not be 100% correct – feel free to let me know if there are any mistakes in the description above!