When you are optimizing the performance of your Storm topologies it helps to understand how Storm’s internal message queues are configured and put to use. In this short article I will explain and illustrate how Storm version 0.8/0.9 implements the intra-worker communication that happens within a worker process and its associated executor threads.

Terminology: I will use the terms message and (Storm) tuple interchangeably in the following sections.

When I say “internal messaging” I mean the messaging that happens within a worker process in Storm, which is communication that is restricted to happen within the same Storm machine/node. For this communication Storm relies on various message queues backed by LMAX Disruptor, which is a high performance inter-thread messaging library.

Note that this communication within the threads of a worker process is different from Storm’s inter-worker communication, which normally happens across machines and thus over the network. For the latter Storm uses ZeroMQ by default (in Storm 0.9 there is experimental support for Netty as the network messaging backend). That is, ZeroMQ/Netty are used when a task in one worker process wants to send data to a task that runs in a worker process on different machine in the Storm cluster.

So for your reference:

If you do not know what the differences are between Storm’s worker processes, executor threads and tasks please take a look at Understanding the Parallelism of a Storm Topology.

Let us start with a picture before we discuss the nitty-gritty details in the next section. 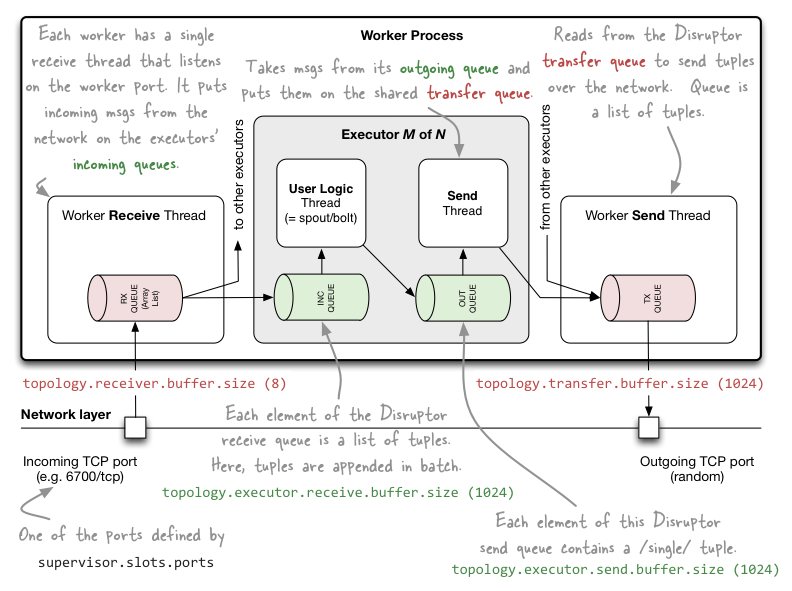 Now that you got a first glimpse of Storm’s intra-worker messaging setup we can discuss the details.

To manage its incoming and outgoing messages each worker process has a single receive thread that listens on the worker’s TCP port (as configured via supervisor.slots.ports). The parameter topology.receiver.buffer.size determines the batch size that the receive thread uses to place incoming messages into the incoming queues of the worker’s executor threads. Similarly, each worker has a single send thread that is responsible for reading messages from the worker’s transfer queue and sending them over the network to downstream consumers. The size of the transfer queue is configured via topology.transfer.buffer.size.

Note that topology.receiver.buffer.size is in contrast to the other buffer size related parameters described in this article actually not configuring the size of an LMAX Disruptor queue. Rather it sets the size of a simple ArrayList that is used to buffer incoming messages because in this specific case the data structure does not need to be shared with other threads, i.e. it is local to the worker's receive thread. But because the content of this buffer is used to fill a Disruptor-backed queue (executor incoming queues) it must still be a power of 2. See launch-receive-thread! in backtype.storm.messaging.loader for details.

Each worker process controls one or more executor threads. Each executor thread has its own incoming queue and outgoing queue. As described above, the worker process runs a dedicated worker receive thread that is responsible for moving incoming messages to the appropriate incoming queue of the worker’s various executor threads. Similarly, each executor has its dedicated send thread that moves an executor’s outgoing messages from its outgoing queue to the “parent” worker’s transfer queue. The sizes of the executors’ incoming and outgoing queues are configured via topology.executor.receive.buffer.size and topology.executor.send.buffer.size, respectively.

Each executor thread has a single thread that handles the user logic for the spout/bolt (i.e. your application code), and a single send thread which moves messages from the executor’s outgoing queue to the worker’s transfer queue.

Where to go from here

The various default values mentioned above are defined in conf/defaults.yaml. You can override these values globally in a Storm cluster’s conf/storm.yaml. You can also configure these parameters per individual Storm topology via backtype.storm.Config in Storm’s Java API.

How to configure Storm’s parallelism

The correct configuration of Storm’s message buffers is closely tied to the workload pattern of your topology as well as the configured parallelism of your topologies. See Understanding the Parallelism of a Storm Topology for more details about the latter.

Understand what’s going on in your Storm topology

The Storm UI is a good start to inspect key metrics of your running Storm topologies. For instance, it shows you the so-called “capacity” of a spout/bolt. The various metrics will help you decide whether your changes to the buffer-related configuration parameters described in this article had a positive or negative effect on the performance of your Storm topologies. See Running a Multi-Node Storm Cluster for details.

Apart from that you can also generate your own application metrics and track them with a tool like Graphite. See my articles Sending Metrics From Storm to Graphite and Installing and Running Graphite via RPM and Supervisord for details. It might also be worth checking out ooyala’s metrics_storm project on GitHub (I haven’t used it yet).

Watch Nathan Marz’s talk on Tuning and Productionization of Storm.

The TL;DR version is: Try the following settings as a first start and see whether it improves the performance of your Storm topology.